Tired of feeling and looking like a schlub, last Spring I signed up for a contest at my gym and kicked off a month and a half journey by sharing my weight (eep; highest it had ever been) and asking for cheers. I lost. Both pounds — 35 — and the contest — no $1000. I was devastated and salty. Still am.

I fell off the wagon over the summer and gained ten pounds back.

In August, I started two new challenges. And won both.

I became addicted to one of them (DietBet), won it a couple of more times, and am currently in a six-month’er with one month to go. Stay tuned.

At the start of November though, even with all this progress, I was concerned. Holidays + travel every week for five weeks + busy’ness. Well, we know what that means. Bye bye healthy choices. This concern plus scrolling Facebook late at night, well, we know where that leads. Bad decisions.

I saw an ad for a free six-week challenge. I love free. I love timeframes that are long enough so that you can accomplish something but no so long that it takes over your life. The catch? It was a Crossfit challenge.

Crossfit? Crossfit?! Crossfit is for not-me’s. It’s for Todds and Ashleys. It’s for thick necks and people who are “ripped.” It’s for booty shorts and those who know what a burpee is let alone can do one.

My weight lifting experience was putting back the eight pounders someone had left on the studio floor.

I don’t do protein shakes or athletic gloves.

I think you get arrested if you call it a “gym” and not a “box.”

The only time I squat is when I’m peeing in the woods. I haven’t been to the woods in five years.

What the hell is a WOD?

Group fitness? Like, doing things I can’t do in front of people? With people? While people are waiting on me? It sounded horrible.

See, I have this thing, this track record of doing things that sound horrible and like certain death and then not only not dying but achieving and surprising myself and feeling good. Like asking guys out. Going places solo. Giving a presentation in a place I didn’t belong. Dancing in front of 700. Improv in front of 700. Stepping. Storytelling. Giving a TedX (no notes, what?!). Entering a comedy festival. Climbing mountains in Norway, Maine, Ireland when I hate heights and become an illogical, paralyzed, crying adult baby.

I also have this thing where I get tired of complaining, excuses, and wanting change but not doing anything to create that change (both from me and from others).

Which is how I found myself saying yes to the Bucktown Crossfit Six-Week Challenge. 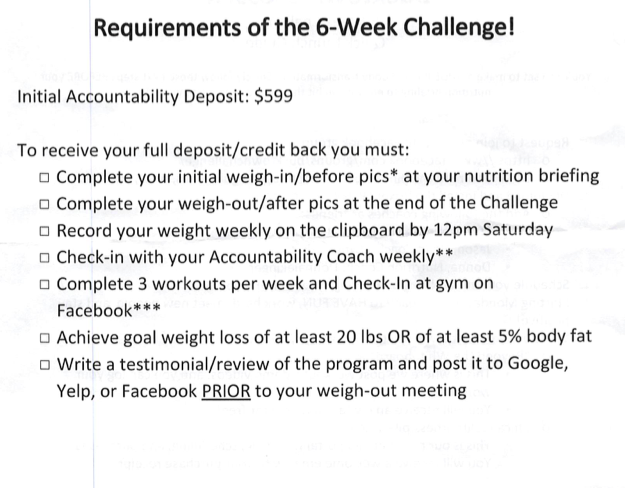 That $599 twist was not in the ad I saw. I don’t think I would’ve gone in had it been. Smart sales technique. After I got the run down at my informational meeting, I was asked, “So what do you think?”

I felt the words “I need to think about it” forming in my throat. We know what those words mean — if I left to “think about it,” I’d never sign up, I’d never come back.

Perhaps it was because when the gal heard the name of my company she responded, “You’re Mac & Cheese?! I know you, I was on your mailing list for years. I need to get back on that!” 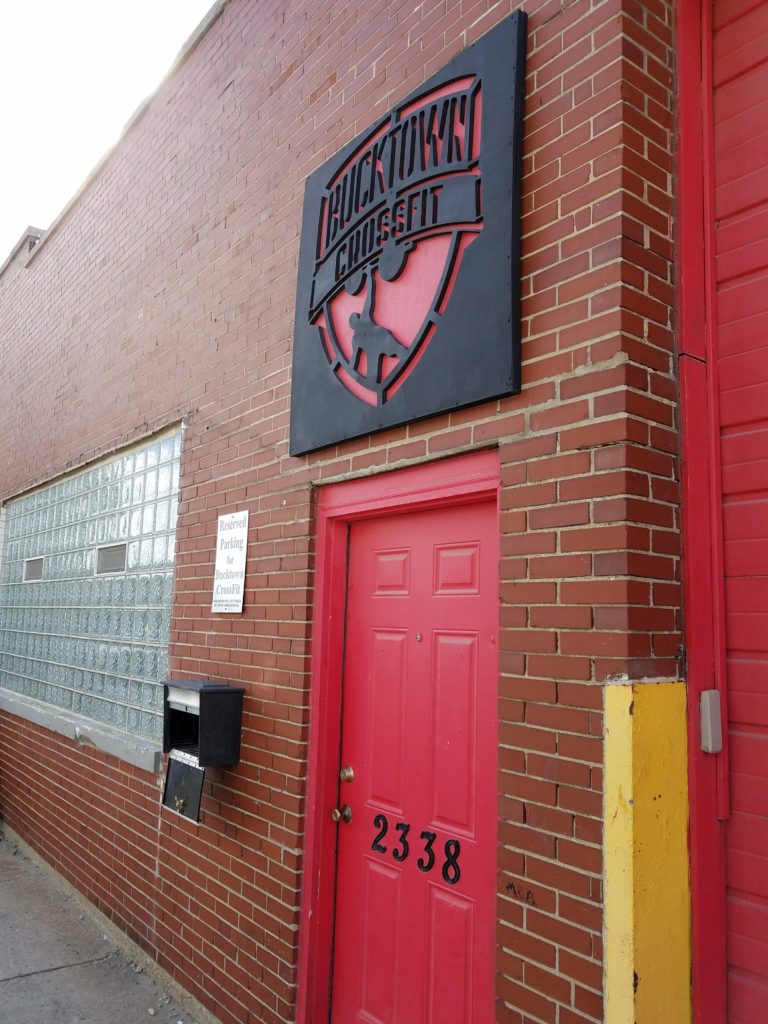 Day of my weigh-in, I treated myself to my last meal. 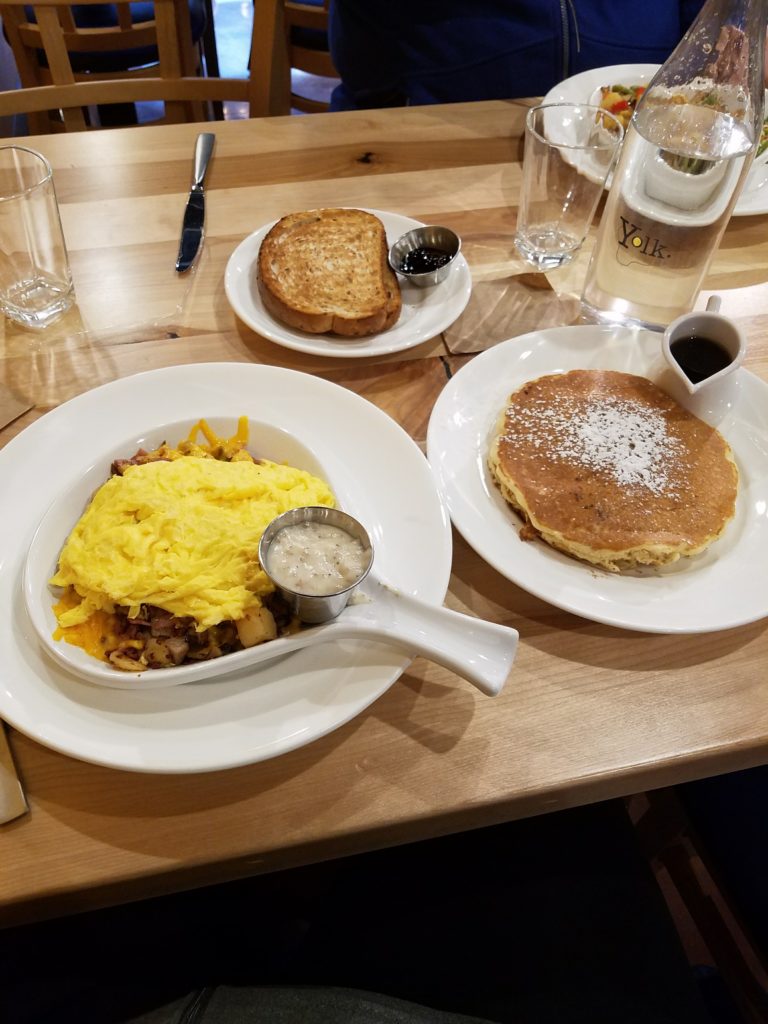 As if signing up for Crossfit wasn’t horrible enough, I had to get weighed in front of a room full of people. And then record my weight on a clipboard that would be left out for everyone to see for six weeks. I don’t like to weigh myself in front of myself let alone in front of thirty strangers. That was fun. 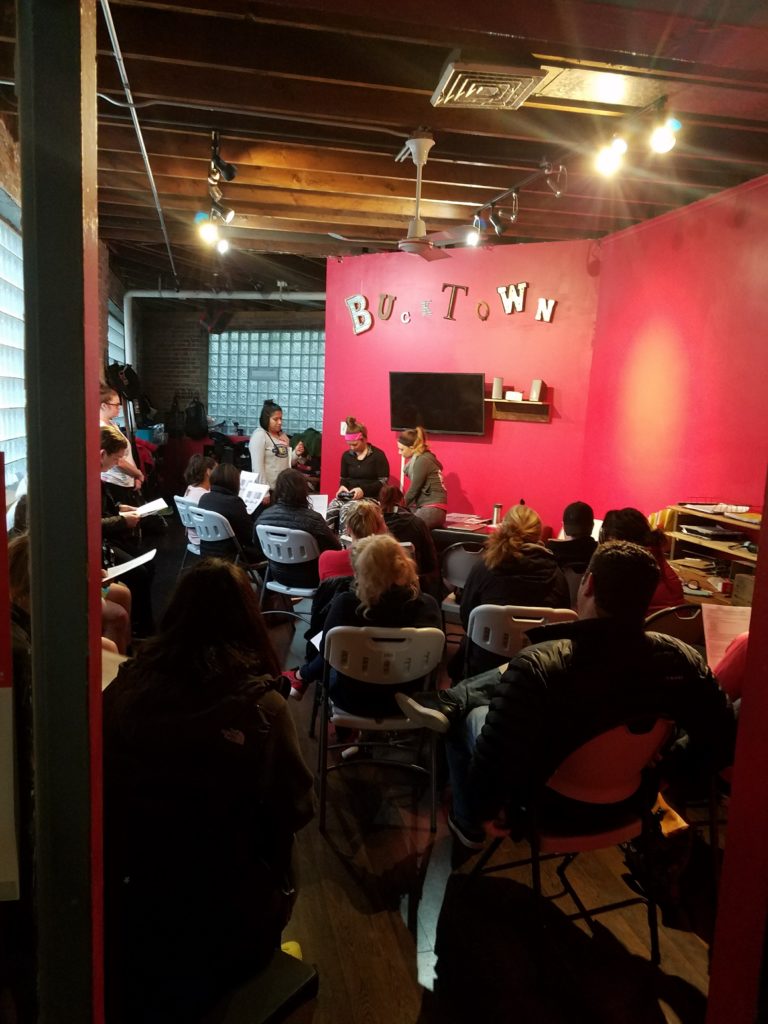 Getting weighed in and BMI recorded

What I Liked & Where I was Successful 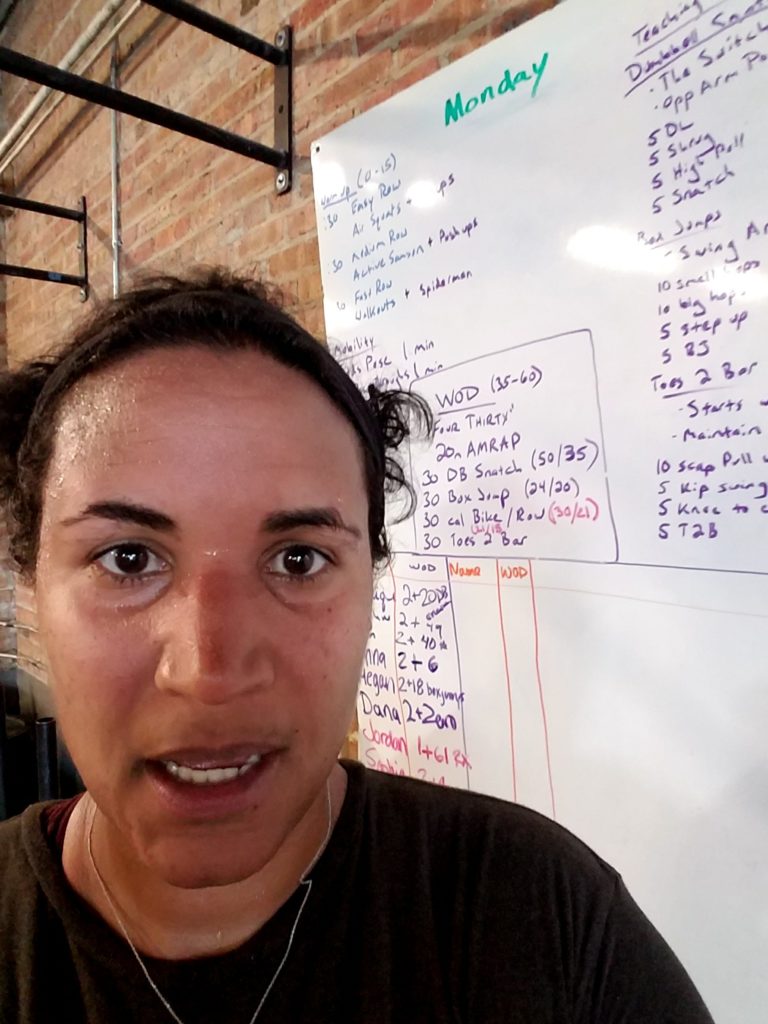 The Whiteboard — where you see what you’ll be doing (the WOD — Workout of the Day) and where you record your time. Also, my “What did I just do?!” face. 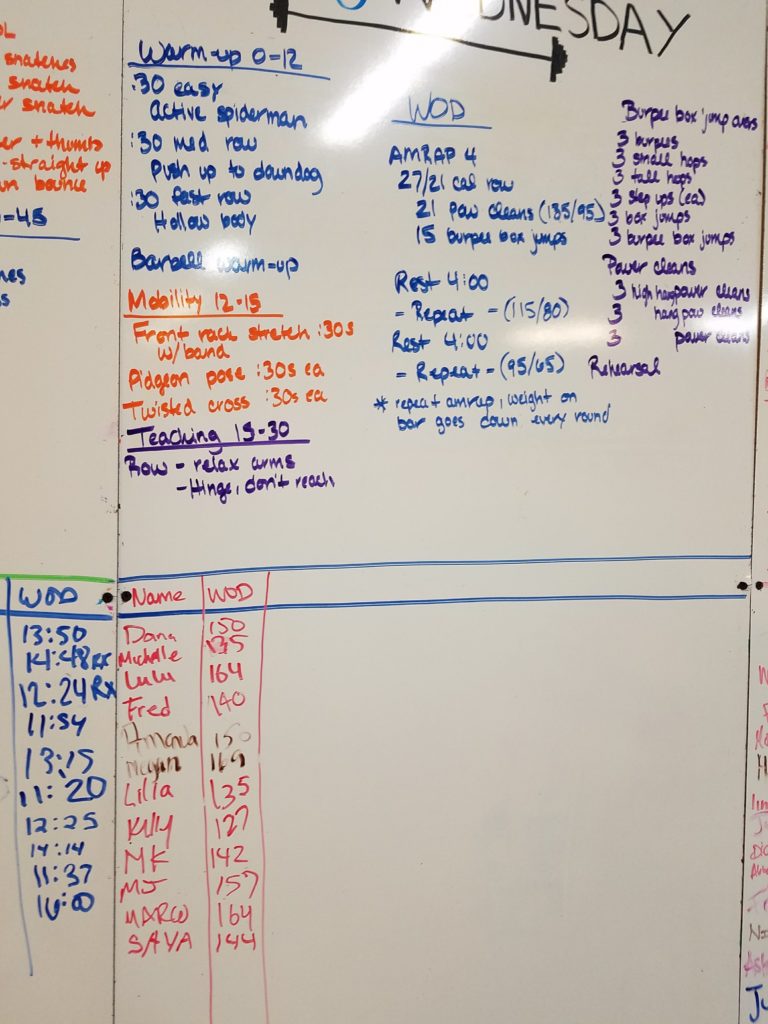 Congratulations on completion of the Bucktown Crossfit 6-Week Challenge!

I did it. I completed it.
But I also didn’t do it. I didn’t achieve the requirements to get my money back.

You, Saya Hillman, currently have $204 in gym credit:

As you may know, monthly, unlimited membership at Bucktown Crossfit is $200. Your membership is all set up and with the credit applied, your monthly rate is $183.

I chose not to continue.
It’s pricey.
I already belong to a gym I like.
Bucktown Crossfit is just far enough that in bad weather or when I’m feeling particularly excuse’y, I wouldn’t go.
My gym is three blocks away on purpose. It has to be as easy as possible for me to workout. I need something I can walk to in less than five minutes.
My unofficial data — pre and post-class conversations — showed that it appears most folks continue on and the ones that don’t are like me. They enjoyed the experience and saw results but finances kept them from staying.
So, I lost $599.

I’m in no position to lose $599. I’m a self-employed gal who never knows when and from where my next paycheck will come. Yet after the initial “Bummer!”, I quickly shook it off. Why not winning $1000 in my gym contest resulted in tears and losing $599 resulted in “Bummer!”, I’m not sure.

But here I am, ok with it and not feeling end of world’y. 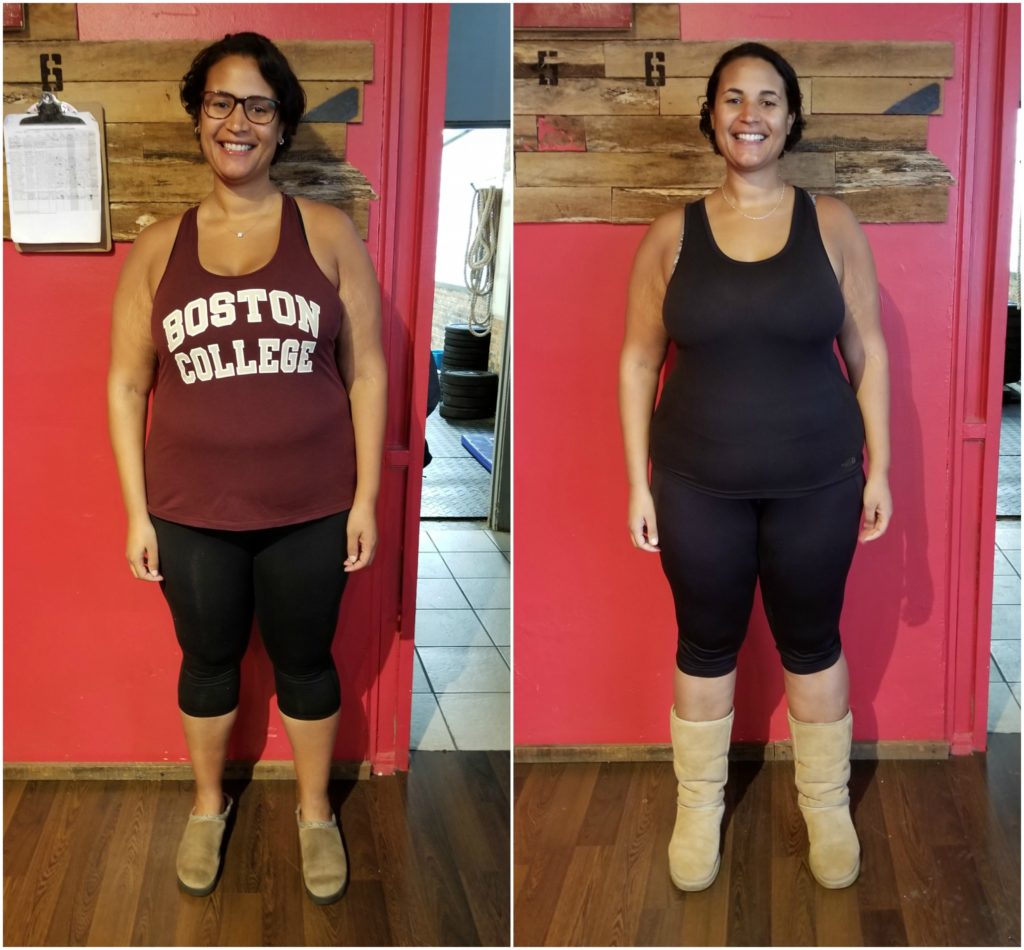 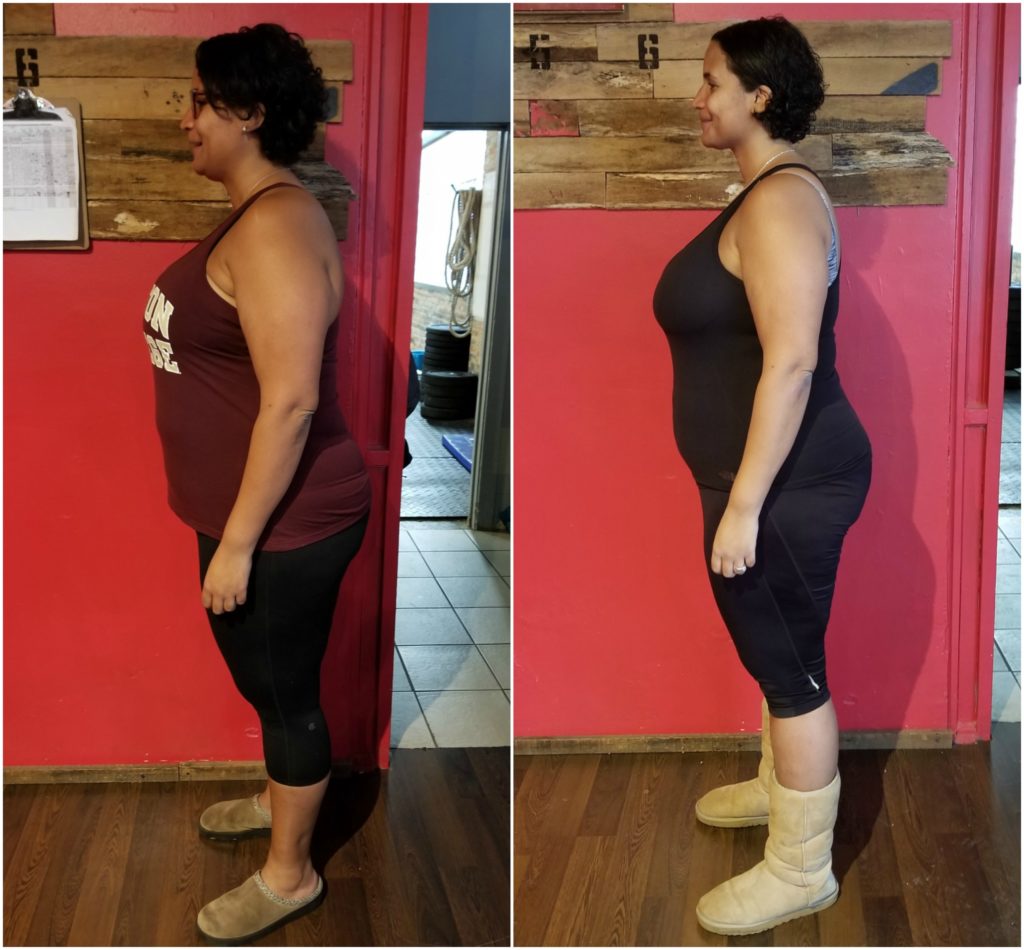 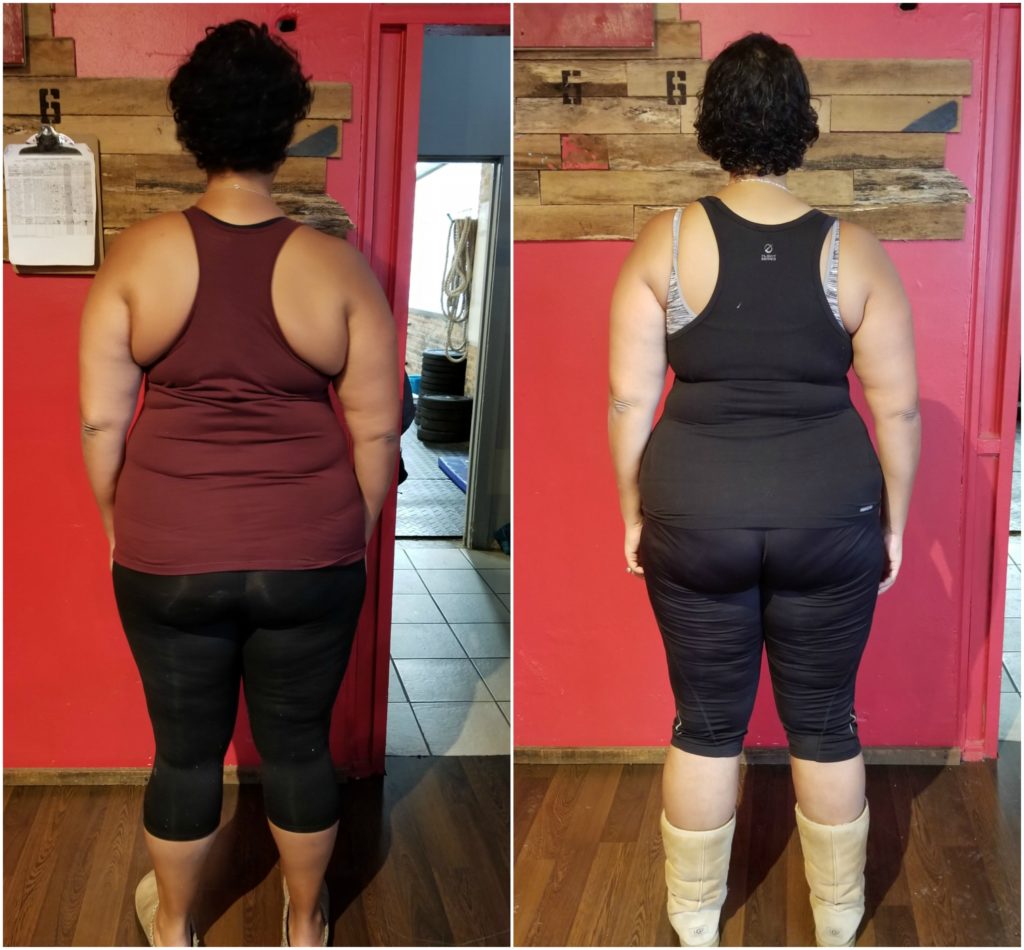 I find it hilarious that I became a Crossfitter and Best Friend a vegan. I’m sure you’ve heard the joke “How do you know someone does Crossfit?” OR “How do you know someone’s a vegan?” — “They tell you.” I guess we became the most insufferable couple in the world for six weeks. He’s still vegan’ing so really World, I didn’t continue for your benefit. We don’t want to be insufferable, we want to be loved!

I still can only jump an inch off the ground — people who can do Box Jumps, I am in awe. I’m out a wad of cash I would love to have back. I “lost” and I don’t like to lose. But no regrets.

I learned. About myself and about things I didn’t know about.

I did another thing I knew I couldn’t do.

I’ll be partnering with Bucktown Crossfit to offer our respective members a Life of Yes℠ experience, Improv for Non-Improvisers for their members and Crossfit for Non-Crossfitters for Cheese-Its.

Here’s to doing horrible things that turn out not to be horrible. Wondering what the next installment will be…

Thanks for this! You did amazing work and I feel like you deserved your full credit for the amazing journey you accomplished! Here’s to keeping this life in full motion, healthy, and jubilant!

Thanks, Jee! Appreciate the cheerleading.

Great article. Do you know the percentage of people in your group that did achieve the goal?